Something to Strive For 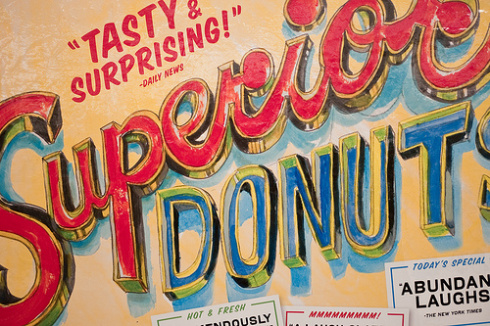 Saturday I had the privilege of seeing Tracy Letts’ latest play, Superior Donuts. I saw his pulitzer prize-winning August: Osage County about two years ago and it was the one of, if not the best plays I’ve ever seen. It made me laugh hard, cry hard, think a lot. I can’t say enough good things about it. So, needless to say, I had high hopes for Donuts! It was showing at the Geffen, which believe it or not I’ve never been to (those tickets don’t come cheap!). As I’m an actor and theater-lover I’m of course going to have my nitpicky opinions, but all those aside, this was a great show with great actors. And of course, as an actor and theater-lover, I cannot help but imagine myself–dream of myself–on that same stage doing work of that same caliber working with actors of that same level of talent. It’s something to strive for. Ten years ago, or even five years ago for that matter, this may have seemed like a pretty far off dream but what I realize now is that I’m getting closer:

– I remember when I first entertained the thought of moving back to LA from SF to do the acting thing once and for all. I started to seek out good theater. I went to many different theaters around town, one of which was Theater of NOTE. I was lucky I even got in because I was on the waitlist. The play was Erik Patterson’s He Asked For It (Patterson has since gone on to gain some noteriety around town). I was impressed from the line out the door to the professional set to the top notch acting (and hefty credits) and I sat in that audience dreaming of being on the other side. Well, two years later I was.

– At the Geffen the other day, I bumped into two actor friends I knew, one is a very talented Broadway (and film &tv) actor while the other was actually understudying a role in Donuts! Knowing the two of them and seeing them there made me feel connected to the Geffen and that whole tier of theater, like I was part of the club too. Goes to show that after a while, it’s a small world after all.

– I did have the privilege, once, to audition for a Center Theater Group show at the Taper. And I had the privilege of getting called back. This was a dream come true. I used to only want that phone call- the call to come in. And I got it! Now my dream is bigger, but I think so are my chances.

Believing Your Way to a PartIn "auditions"