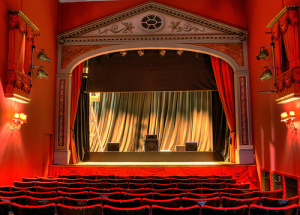 …can be a great learning tool! Last month I saw two plays I wasn’t crazy about, one much less so than the other. I wont say the names of the plays or theaters because I know folks through both, and I appreciate and admire the hard work that went into both. I know producing new work– or any work– is no easy feat! So kudos, for sure.

That said. The first I would venture so far as to say I hated. In fact, I was offended it was so awful. Within the first minute I was bored. Within five I was insulted. Half of the actors themselves seemed a little insulted- they weren’t committed to the ridiculous characters and story they were telling. Commitment is the first thing that can make a potentially ridiculous-awesome play awesome and not just plain ridiculous. There was one actor who worked and made any scenes he was in at least tolerable, because he remained so true to his character, never breaking, never judging, being truthful in the most absurd situations. I learned how commitment can go such a long way and that it is our job as an actor to bring some truth or entertainment value to whatever story is being told no matter how stupid we think it is. That is where the other actors fell short. To be fair, I don’t know if I would’ve been able to maintain my dignity and give a full-fledged performance night after night with this awful play either. I guess it was a learning experience for them as well.

As for the second, hate is too strong a word to describe something I didn’t at all understand. However, this idea of commitment still comes into play. And that is, commitment to the kind of story you are telling. This play was so strange and off the wall I don’t think the people in it really knew what kind of story it was- a drama? a comedy? mystical? real or dream? Of course a play can have all these elements, but I think it still needs a clear audience. Who is this story for? Why are you telling it? Just to be cool and have neat costumes and sets and wordy language or to move and entertain? I was neither. But, I am glad I saw it. I’m glad I went so that I could see what doesn’t work (for me) and why. It made me think in terms of how to be a stronger writer and a stronger actor and a stronger producer. Basically, a stronger story teller.

Fortunately, I’ve also had my fair share of good theater. But, alas, that’s for another post. I think it’s always good to see what’s out there, the good and the bad, the small houses, the big houses. You never know what you’ll come away with.