I went to my website the other day just to see something and, in my horror, discovered that my website no longer existed. Insert minor freak out. Apparently I never got the memo that MobileMe was discontinuing its services and so all websites hosted by the platform would be defunct. However, this was a sort of blessing in disguise as it allowed me to completely rethink and remake my website. It ended up being really fun, and a great opportunity to look back at all that I’ve accomplished. This gave me even greater motivation to create a website that truly reflects me and what I am capable of. So many of these actor marketing gurus talk about brand and image. I find, that it kind of ends up happening without too much trying. If you stay true to yourself while you market, you wind up with a very specific look and feel to you. I could be wrong. Maybe you’re looking at my Twitter, Facebook, Website and thinking what is this girl talking about. Anyway, I feel they all represent me pretty well– especially as far as a casting director or agent or film director is concerned.

The new site was like a new boost in the entire acting career department, which I’ve been feeling pretty shitty about recently. I even got some new photos taken over the weekend to use online, marketing or where ever. I also got the rough cut of the teaser trailer for my movie. This career is full of ups and downs so sometimes you have to create your own ups to keep on going…

Well, without further ado, please check out the new and improved, NinaHarada.com!

Keep Your Spirits Up… Perspective 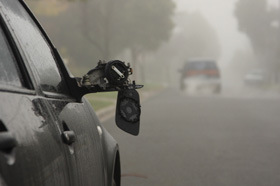 Not gonna lie… sometimes, it’s really really REALLY hard to keep those spirits up. I am not always that good at it. For instance, when I ram my fucking (excuse my language) side mirror into the wall of my very tight parking space consequently ripping it off. I could literally hear that cash register sound cha-ching! go off the second it happened. Just stepping out my front door cost  $500, and I haven’t even gotten anywhere yet. This was, you could say, the straw that broke the camel’s back. It was quite easy to let this one incident snowball into everything else I am stressed out about (no money, shitty economy, a million job apps and no responses, no auditions of late and lacking the motivation to submit anyway, so many weddings and so little funds and so having to pick and choose and feeling like a shitty friend, discovering my actor website is cancelled and having to find and pay for a new hosting service…………………).

Perhaps it was all that stress that got me into the predicament in the first place.

But, here’s the thing. At least, no one got hurt. At least my car still drives. At least I have a car. At least I have a job, even if it’s not enough hours or pay. At least I have an apartment. At least I get to live in LA following my dreams. Yes, the reality of all that is often living paycheck to paycheck, hitching a ride to an audition, sacrificing new headshots for a new side mirror. I chose this particular path when I could’ve quite simply went a different route. Perhaps taking the corporate route, as a girlfriend and I were saying over coffee this morning. But it’s just not us. It’s just not me. I wouldn’t be happy. Not that I was happy this morning when I ripped my mirror off, took it to the bodyshop and found out I also need new tires, new brakes and while I’m at it a good ‘ol oil change and lacking the funds to pay for all of it. But I am very happy when I get to do readings, make theater, film a trailer, help kids put up a play, and I must remember that part. All the fun stuff that — though it pays very little — fills my heart and soul.

It’s funny because a few days ago I was going to write a post about how the whole acting thing feels so hopeless and pointless right now and yet, the mirror breaking prompted me to write this post and now I’ve convinced myself otherwise. I just had a director meeting for this awesome short play festival last night. I get to act in a reading this Sunday. And the trailer for my original feature is going to be finished any day now. Those are things I am stoked about. Not to mention starting grad school in the fall, plus new teaching responsibilities at the high school I work at. All good stuff. Positive stuff. And positive stuff brings more positive stuff, to put it so articulately. I guess I just needed to break a mirror to get a little reflection, gain a little perspective.