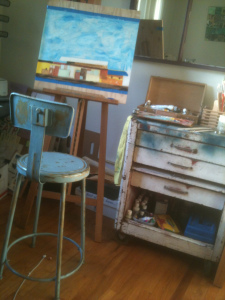 It’s so important to nurture all of the artistic parts of you- not just the acting part. I often forget this when I get into the daily grind of: audition – part time job #1 – audition – workshop – part time job # 2 – submitting – part time job #3 – you get the picture. And yet, for me, painting was my first love. (I think had I been exposed to the stage before paint brushes, it might’ve been another story, but painting came first nonetheless). As much as I crave brush-to-canvas, I tend to forget, or fail, to factor it into my life. I’ll go weeks, months and dare I say years(?) without creating a single painting. And then something happens- I finally get myself to a gallery or an art opening, or hear a cool NPR story about some obscure artist- and I remember, “I should paint!” 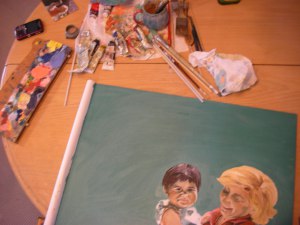 Fortunately, I had that moment last week and began work on a project I’ve had in my head for a very long time. It felt so good to not only get the idea out of my head and onto a canvas, but also to do something creative other than acting. Plus, I’m sure I don’t need say this, but one creative outlet feeds another. I’ve been feeling pretty crappy about the whole acting thing recently, but working on a painting – having this other creative project – really shifted my focus.

So get out there, and pick up a paint brush, pen, mic, saw, needle & thread- whatever your tool may be- and make something! Happy Monday! 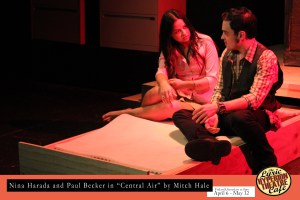 This is how I've been currently working my acting muscles- in a new production called "Central Air" at the Lyric-Hyperion Theatre in Silver Lake, CA.

Not, like, Jim Carey style and never getting out of character. I mean, always have stuff on your plate that allows you to do the one reason you’re here in LA in the first place: act! Whether that means an audition, a scene study class, improv class, on camera class, casting director workshop, theater, showcase, staged readings, read a play out loud with friends, work on a monologue, shoot a short, and the list goes on and on.

Fortunately, I’ve had lots of awesome opportunities that have made this one part of my career pretty easy. (Even though all the other parts of it have felt very difficult lately- but that’s for another post!) I’ve been in back-to-back plays since December (currently in the show Central Air). I’ve been doing casting and agency workshops at One-on-One Productions and then this weekend I’ll be checking out a new monthly audition workshop class, with working actor Aaron Craven (I’ll report back in two weeks). I’ve been lucky enough to really work those acting muscles!

So, if you feel rusty or restless because you haven’t booked a gig- go out and shoot something, read something, or sign up for something. Just ACT! =)

Guest Post: How a Career in Radio Can Help Launch an Acting Career

How often do you hear people say they want to grow up to be a radio personality? It happens, but not nearly as often as the dream of becoming an actor is discussed. It is usually much more difficult to become a highly paid actor than people expect. Students graduate from high school or college and make their way to their favorite acting capital only to find many more qualified applicants than jobs. Some will become background extras while others will work in the service industry while they audition for the perfect role. A lucky few will fall into a radio gig and realize it is the perfect stepping stone from which to launch an acting career.

There is good news and bad news about future acting prospects. First, the good news; according to the Bureau of Labor Statistics the overall job growth is expected to be about eleven percent, about average. Additionally, it is possible that opportunities will be greater than anticipated due to surging demand for movies and the abundance of new television networks. Now, the bad news; competition is going to be fierce. Additionally, the hours are really long, the work is exhausting, and the pay really isn’t very good at first. Now for a little more silver lining! Most people drop out of the competition early, so by simply sticking with it your odds of success increase.

What many people don’t realize is that most on-air radio positions require a high level of acting ability. Inflection, tone, enunciation, expression and speed of delivery are all very important for a medium that does not allow for any visual cues. Indeed, it can be more challenging to make a connection with an audience using vocal talents alone. While it can be as difficult to become a popular radio personality as it is to become a moderately well-known actor, there are several other ways radio can help launch an acting career. One way to reach a wide audience and quickly build a vocal portfolio is through radio commercials. These can show your range and flexibility and can help actors land other vocal projects such as book and video narrations and voiceovers for animated characters. Establishing yourself as a vocal actor can help build your reputation and open doors for future acting endeavors.

Once you are working in the radio industry it is time to become a member of some very important associations. Belonging to these associations can help you find better projects, meet influential people in the industry, and offer career advice. One of the best options for those using their vocal talents in radio is the American Federation of Television and Radio Artists. They can help you translate your work in radio into the broader voiceover market including audio books, promo announcement, videogames, and animation.

You are an actor! Do not limit yourself by saying you must be on the stage or in a film. While these types of positions typically offer more public recognition they do not define one as an actor. If you have the ability to invoke whatever reaction you want in an audience with your words, a glance, or a shrug you are already an actor. Open your mind to different forms of acting that will allow you to express yourself and reach your audience. You may find the radio roles you pursue as stepping stones become a satisfying way to fulfill your heart’s desire.

Sarah Stockton is an Outreach Coordinator for Voices.com, a site connects businesses with professional voice talents. She enjoys helping potential voice talent find their start in the voice industry.