I’ve taken a lot of classes along this road to becoming a working actor: scene study, on-camera, Shakespeare, movement, casting director workshops, etc. But, somehow, I’ve never taken an audition technique class. I know. So when I heard about this one-day workshop led by actor-teacher Aaron Craven, I thought I’d give it a whirl. It just so happened that his next workshop was the day after my final play closed (after a string of non-stop plays since November) and my first weekend day free in six months. I had no excuse. There wasn’t a more productive way I could spend my Sunday. Sure, why not.

His workshop was a solid 7 hours (minus a 30min lunch break) with a tight-knit group of about 11 diverse actors. I didn’t really know what to expect, just went along for the ride– and I got one alright. We began with some discussion about auditioning itself- our fears, problem areas, etc. This led into a moment-to-moment exercise. And then finally, we got into our scenes (which were assigned to us a few days ahead of time). These were taped and redirected by Aaron for as many times as we needed.

What people will gain from any audition technique class is going to be different, of course. But I can tell you that my main “takeaway” from this class was to not be afraid of the sides. Meaning…taking control of the sides, and not the other way around. Using the bits that are helpful (via action lines and parentheticals, etc), throwing the rest away, and letting the script itself be a part of the scene. I feel like I’ve been told this before, but Aaron has a special way of communicating certain concepts to make them click. There was a lot of “clicking” happening that Sunday. Some other click moments were, if you do the scene as you, you can’t help but be unique and to take the idea of perfection out.

It was a great way to spend a Sunday. I believe the next workshop is next week? It’s worth checking out.

Believing Your Way to a Part

The other day I made a horrible realization. Well, horrible at the time. As I was being all down-and-out about the acting thing, it occurred to me that it’s been over a year since a total stranger cast me in something (and I know that most gigs don’t come this way… that’s why you have to exhaust every avenue). I mean, I’ve obviously been doing stuff throughout this past year, but it all came from my theater company or someone who saw me in a show, or a friend of a friend, etc. However, none came from a total random audition off LA Casting or Actors Access that I attended. This scared the shit out of me. All those usual insecure-actor questions started bubbling up… Am I not good enough? Pretty enough? Talented enough? Blah Blah Blah! Granted, this is hard for me to admit but I’m sharing it because I’m sure I’m not the only one with this experience. Afterall, going after your dreams is scary! So much relies on faith. Believing your hard work, drive, and patience will pay off. Believing in yourself.

Fortunately, my minor freak out only lasted the evening and by the next day I was back to my usual resilient, determined, persistent actor self. If I don’t believe in me than who is, right? So I shook that all off, was back to the routine and am happy to say that one of the auditions I attended last week eventually led to… me booking the part! It was off LA Casting. I went in like any other audition. I was called back. I went in again. And I then I landed the role! Finally.

More details to come, but I will be in a new play opening next month and I’m super stoked. I’ve met the cast and producers and creative team and they all seem like such lovely people. It got me even more excited. I have that same feeling about this project that I had about that one fateful audition in San Francisco four years ago. Or maybe this will be nothing more than a cool play with cool people I may never see again, and that aint so bad. But, I dunno, call it a hunch, I got a good vibe about this. Most importantly, for whatever reason, I believe in it and it feel so good to be a part of something I believe in while believing in myself.

No Excuses: How Your Acting Career Can Be In Your Control 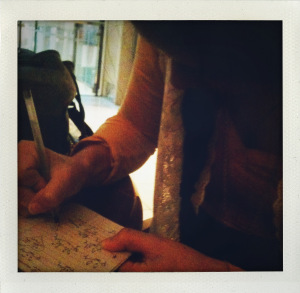 First of all there are a SHIT TON of things NOT in your control. So let’s just get that out of the way right now. No use spending your time stressing about things like, did the casting director like my audition? Dude could’ve been having a bad day, the part could’ve already been cast but they need to see others for back up, the part ended up getting cut for budgetary reasons so your role doesn’t even exist anymore, etc. Not in your control.

But the good news is, there are things that are!

Last month I did a little experiment of diligently recording the number of auditions I submit for versus the number of auditions I get called in for to show how a lot of this really is a numbers game. Every day, multiple times a day, I scrolled thru the “notices fit for me” on LA Casting and Actors Access. This yielded a good handful of auditions, which led to me driving all across town (ok, fine, mainly Hollywood, but, still) taking an hour of my day for what usually is 2 to 3 minutes of actually auditioning. 4 weeks and 19 auditions later…. I haven’t submit for a single thing.

Why? Well, that’s a good question. I told myself a number of reasons: “It’s too much gas.” “It’s too exhausting.” “I’m not going to get anything from them anyway.” Basically, a lot of excuses. You might wonder, gee, if this girl starts complaining over a mere 4 weeks of submitting & auditioning (which is only a fraction of what pursuing this career is about anyway) then how the hell is she going to make it in this business?!? You’re absolutely right. These are all excuses. But, at least I know that is all they are. They are not legitimate reasons. And I do believe it is healthy and maybe even necessary to vent every once in a while. Because traipsing across town IS tiring. Gas IS expensive. And your “next gig” isn’t necessarily going to come from a blind submission, it can come from anywhere.

However, submitting and auditioning is one of the things that IS in your control. So easy. You click. You get called. You go. You kick ass. You’re done. And you never know where it can lead you.  You are at least doing one thing towards your career.

Another thing I’ll admit to have complained about- not having a theatrical agent. (“I don’t have enough credits” “My type is too hard to cast” “I’m not union”) Again, excuses. I should know better. I gotta switch gears and see what IS in my control:

– reach out by sending a postcard, headshot, or phone call

– figure out how people see me, look at what type of roles in the past I usually get and see if there is a pattern, look up other actors similar to me and see what roles they usually get cast for

– save money to pay for my SAG card if that’s what I feel is holding me back (for the record, I don’t think it is right now– trying to hold on to my SAG -E for as long as I can)

This breakdown of steps can be done for a lot of  actor “problems” and then voila- you’ve got action items that are all bringing you one step closer to the acting career you want to have.

The beauty (or curse depending on how you look at it, but I like to keep things positive!) is that there is always something you can be doing for your acting career. There are no excuses about why you aren’t making it or how it is hard profession. Guess what? EVERY professional career is hard, really hard, at the beginning. You have to put in those extra hours, blood, sweat and tears to get the promotion, the raise, the business deal. Same goes with acting. Now is the time to be putting in all the leg work and eventually it will pay off. I truly believe that.