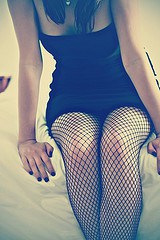 Do I have a story for you!

So, like I said in my last post, jumping back into the swing of things wasn’t what I had hoped for. But, I jumped in nonetheless and slowly but surely got into the rhythm of submitting, auditioning, writing and meeting. Last Monday I went in to audition for a night of one-acts at a theater in West LA. Tuesday morning I got an email from a guy who is friends with the person I auditioned for saying that he is a casting director for a reality show to hire actors for reenactments. Followed a few minutes later by another email saying he saw me in Skeleton Stories and enjoyed my work. Tuesday afternoon I met with him. Wednesday I filmed.

One, that shows how fast things can work around here (on a much, much smaller scale) and two, the beauty of putting yourself out there and building a network of people who get to know your work. Three, shows you how I landed my first job upon returning home.

Now let’s get to the job. It was one of those experiences that I chalk up to really good late night interview material for Leno or Letterman. Like the low-budg horror flick I stared in two years ago. You can’t write this shit.

So, the job. My part was “Saucy Maid” complete with french-maid costume: fishnet knee-high stalkings, ridiculously tiny and equally useless lace “apron”, faux pearl necklace with matching bracelet and a white feather duster. Yup. My character worked for a “maid” company where women in sexy maid outfits would “clean” homes. Yes, lots of quotation marks. So there I was, standing in the typical LA summer heat (that for some reason or another didn’t come until this past week), in a very non-breathable nylon and sequin mini dress, holding a freakin feather duster in the middle of the Valley. Yeah, I felt like a prostitute… or porn star, take your pick. I also felt like a hypocrite. I spend my days avoiding breakdowns precisely like the one that most likely accompanied the very character I was hired to play. I’m a woman. I’m an actor. I’m a feminist. And I’m not Angelina Jolie or Meryl Streep where I’d get to pick my script, any script. How do these things align? How do I reconcile feminist, actor– new actor– as I take on this career path?

Now, I’m not saying I regret doing this project. Honestly, it was a blast. Cool people. Hilarious story line. Lots of fun. And a paycheck. I also know that not every part out there is going to be “Hannah” or “Erin Brokovich” nor would I want it to be. I was just standing there in my Saucy Maid outfit, killing time with my iPhone in one hand and fanning the heat away with a feather duster in the other, wondering, what does this all mean……