A Test in Patience 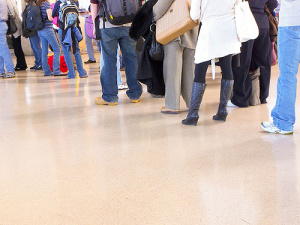 Last Friday I had a commercial audition. They were supposedly the callbacks, and we were to arrive sometime between 4pm and 6pm. So, I got there at 4 on the dot. There were already about 15 others signed up when I arrived. Sort of surprised, but, whatever… signed in on the sign-in sheet and waited for further instructions. It was one of those annoying auditions where you don’t actually say anything, you just react to voice over text that the casting assistant or whoever reads aloud to you. So as you wait you don’t even have some sides to go over. There’s really nothing you can do but wait. Thank god for iPhones, right?

The first few pairs go in (the commercial called for a young couple), each pair taking about 5 minutes. When the director and casting people realize that they had a lot of actors to go through they tried expediting the process by pairing us off ahead of time so we were ready to go in when called. Well, then chaos ensued. There were twice as many women as men, which posed the problem of how to call people in. Instead of figuring it out, however, they just started plucking people out of the crowd and pairing them together according to “ethnicity”. Well, I’m sorry, but what’s the point of a sign-in sheet? Or arriving early?  I’m not about to elbow my way past my fellow actors just to get my 2 second shot at selling a medical tube you spit into. Maybe I have the wrong approach, but that’s not the kind of aggressive I like to take on.

I finally got paired to an African-American man, along with two other girls. (At this point they were tripling up, there were so few men). But then, this African-American woman waltzed in at around 5PM and immediately got paired with him and called into the audition room. I was left sans partner, and a tad confused. I asked the casting assistant about getting a new partner and she just said to hang tight. Ok. I don’t want to be a pain in the ass. I also don’t want to completely waste my afternoon, however. I mean, if they are supposedly pairing by ethnicity, I thought as I looked around the room filled with anxious, insecure, overly confident, stressed and cool-as-a-cucumber actors, then maybe I should just leave. Call me blind, but, I don’t see any half-Japanese, quarter-Irish, quarter-Hungarian looking men out there. I politely waited nonetheless.

Then I noticed a huge line that started appearing out of nowhere, from the audition room door out to the entrance of the building. Shit. Am I supposed to be in that line? No one said anything. Did I miss something? I’ve been here the whole time. Maybe they don’t have an appointment. Maybe they haven’t signed in yet. What is going on!? Again, politely as I could, I  asked the kind casting assistant (I felt bad for her, she was clearly stressed) if I needed to wait in this mysterious line… She reassured me that she knew I’d been waiting and that no, I did not need to stand in that line. Well, now it’s like 5:30PM. Check my phone. Chit chat with the actors next to me. Check my email. Chit chat. Check the clock. 6PM. The casting assistant walks over to me and says that yes, maybe I do want to get in the line after all. Great. Now you tell me.  Then, she makes an announcement that, due to time restrictions, the director will be seeing 3 couples at a time. So, that’s 6 people in the room at once. That’s when the line started moving. I go in, do my bit, which takes about 5 seconds, literally, and walk out. Thank you. Goodbye.

Lesson learned? PATIENCE. This experience greatly tested my patience. And in a way, what it was, really, was a smaller example of this bigger picture: a successful acting career will take great patience. It’s all a game of hurry-up-and-wait. And that’s okay. You breathe. You find other things to do in the meantime. You accept it for what it is because what it is aint gonna change. Granted, not all auditions are like this and hopefully not every little step towards my goal wont be like this either. But, if it is, no big deal. A 3 hour commercial audition? Just a bump in the road. One day, I’ll look back on this and laugh.

The Other Side Part 2: Auditions 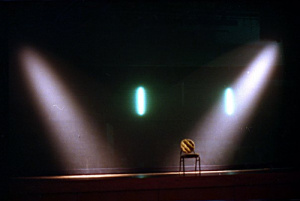 As the producing process continues for ShortLived 3.0, I am learning more and more! This experience, being on the other side, is definitely invaluable. This past weekend we held our first round of auditions for our 3-month long show. After the long weekend of auditions, the directors all joked we could have our own actor’s workshop to teach everyone what not to do. I think we were all slightly shocked at all of the acting faux pas that were made. No wonder everyone thinks they can be an acting coach or hold audition workshops!

Here are some of the audition no-no’s that repeatedly came up:

Coming in without headshot and resume already in hand, ready to be handed to the casting director.

(As in, spending the first minute fumbling around in your purse/briefcase/bag trying to find it while we all stare at you in awkward silence.)

Coming in without headshot and resume stapled together.

(I am not your mother, I can’t take care of it for you. And if you can’t take the little effort it takes to staples two pieces of paper together, how do I know you’re going to put any effort into my production?)

Coming in without professional headshot and resume.

(Rather, a computer print-out of a random picture your friend took three years ago in which you think you look good)

Coming in without headshot and resume.

(Yup, believe it or not, some of the actors waltzed right in without anything in hand at all. Some said, simply, they did not have one. Others said they were in a rush and didn’t have a chance to grab it. While others said they completely forgot. Whatever the reason, we don’t care.)

Coming in without a headshot that looks like you.

Performing your monologue without first telling us your name, the title and author of the piece.

(Yes, some of the actors literally began their monologue the second they walked into the room. It was just sort of weird more than anything else.)

Performing a monologue you made up but pretending it’s from a published play.

(First of all, I’d steer clear of performing anything you’ve written. That’s great you have an original piece. And even if it’s really fantastic, save it for your one-woman show or something, it’s not for the audition room. But if you are going to perform something you’ve made up, please say so! Don’t pretend it’s from an actual play)

(I was surprised at how many people had the balls to perform something without knowing what it was from and to actually tell me that. I don’t want to know that you’re performing some piece you found in a book last week for class.)

Performing a monologue without knowing where it’s from at all.

(Some actors had no idea what their monologue was from at all. Some pretended as if the title and playwright just slipped their mind, but others would say they simply did not know.)

Performing a monologue about sexual molestation, sexual fetishes or rape.

(And I’m talking on at least three separate occasions. I was shocked at how many actors chose inappropriate material. I am a very open person and love theater that pushes the envelope, but for an audition there is a fine line and many crossed it. I want to be paying attention to you and your brilliant performance, not being completely insulted by the misogynistic

Performing a dramatic monologue and not having a comedic one ready just in case.

(A few actors we felt had potential, it’s just the dramatic monologue they chose wasn’t that great. But when we asked if they could do a comedic one, they were stumped. Don’t come unprepared! Be ready for anything!)

Performing a Shakespeare monologue when the only specification we gave was “contemporary”.

(Not to mention, this is a playwriting competition– that means new plays! How is Shakespeare relevant here??)

Performing your monologue and then asking “So, what’s the project?”

(It’s insulting! Trust me, I know that with so many submissions and emails, a project can get lost in the shuffle. But I hope to god that once you’ve confirmed an audition, you do a little research and at least know what you are auditioning for.)

Leaving the room the second you finish your monologue.

(What’s the rush? Do we smell? What if we had some questions for you? Some actors just rushed out as soon as they were done, which made me think, I guess you don’t really care about this project then. Sends a bad message.)

Walk straight into the audition room, while another audition is going on.

(To be fair, this only happened once. But, still, I was shocked! Why would you open a closed door clearly marked as the audition room when the notice next to the sign-in sheet clearly says to sign-in and wait until someone gets you?)

And the biggest, most prevalent audition faux pas of all…  not showing up for the audition at all!

(I was anticipating a bunch of flakes. But it was still really frustrating and discouraging to only see less than half of the scheduled auditioners come in. I appreciated the few who did take the second to email their cancellation. But that was only a select few. The rest were just no-shows! It’s disrespectful. You never know when something like that is going to come around and bite you in the ass.)

The convenience of online casting websites is amazing, but that also means anyone can sign up. Here are a few important reminders to make the most of your use on these Casting Sites: 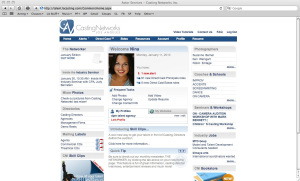