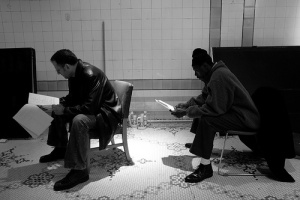 I’ve taken a lot of classes along this road to becoming a working actor: scene study, on-camera, Shakespeare, movement, casting director workshops, etc. But, somehow, I’ve never taken an audition technique class. I know. So when I heard about this one-day workshop led by actor-teacher Aaron Craven, I thought I’d give it a whirl. It just so happened that his next workshop was the day after my final play closed (after a string of non-stop plays since November) and my first weekend day free in six months. I had no excuse. There wasn’t a more productive way I could spend my Sunday. Sure, why not.

His workshop was a solid 7 hours (minus a 30min lunch break) with a tight-knit group of about 11 diverse actors. I didn’t really know what to expect, just went along for the ride– and I got one alright. We began with some discussion about auditioning itself- our fears, problem areas, etc. This led into a moment-to-moment exercise. And then finally, we got into our scenes (which were assigned to us a few days ahead of time). These were taped and redirected by Aaron for as many times as we needed.

What people will gain from any audition technique class is going to be different, of course. But I can tell you that my main “takeaway” from this class was to not be afraid of the sides. Meaning…taking control of the sides, and not the other way around. Using the bits that are helpful (via action lines and parentheticals, etc), throwing the rest away, and letting the script itself be a part of the scene. I feel like I’ve been told this before, but Aaron has a special way of communicating certain concepts to make them click. There was a lot of “clicking” happening that Sunday. Some other click moments were, if you do the scene as you, you can’t help but be unique and to take the idea of perfection out.

It was a great way to spend a Sunday. I believe the next workshop is next week? It’s worth checking out.

How Dance Can Move You 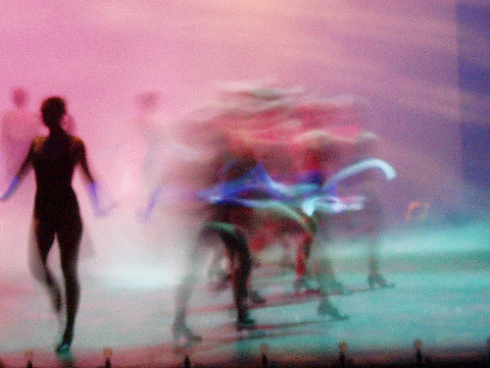 Ok, so it’s like, literally, moving with its pirouettes and passés and kick ball changes. But dance can also move you, as in emotionally, or spiritually. And, if you are watching a dance performance, it can also move you to get off your butt and do some moving yourself.

A couple months ago I watched a dance concert covering modern, jazz, tap, ballet and point at a local dance studio near me. A little before that I subbed for a high school modern dance class. I also have been taking dance classes, at the Sweat Spot and Center Stage Dance. Basically, there’s been a lot of dance in my life lately, and I’m really loving it.

Sitting in the audience at the dance concert, I enjoyed being transported into another world. The use of costumes, light and music helped, but really it was the specific sequence of movements of the dancers that created the new world. Each piece with a theme, they evoked something different. It’s a visceral experience, one that is hard to explain. However, it made me feel in a new way, think in a new way. I guess that is the goal of art? Or at least one of the goals.

I’ve mentioned this before, the importance of movement and dance as it relates to the actor, but recently I’ve really been practicing this. I started taking up ballet. This was terrifying at first, as I haven’t put on a pair of ballet slippers since I was, like, five years old, but it’s such a great way to push myself. It teaches discipline, connection and awareness to your body and of course, it’s a great work out. I’ve also been taking a modern dance class that makes you move in a very different way, and it’s an amazing release.

I find that dance is the perfect complement to acting. Sometimes I am sick of acting classes but I still want to take some kind of class, and dance can still help you as an actor. It opens you up emotionally (I really believe that the physical and emotional are so interconnected), it’s healthy, and it gives you another “skill” you can throw on to the good ‘ol resume.

I have been in and out of various different acting classes since the first time I laid foot on a stage. That was exactly 10 years ago. I’ve realized, over this past decade, that I can only go a certain period of time without a class. Usually, it’s around 7 months. Then I start getting this itch to get back into a studio. The reason I don’t stay in a studio all the way through is because I usually reach a point where I feel like I’m not gaining anything. It’s like I’m not really listening anymore. I need a break. (As does my bank account!) And I think it’s good to take breaks! It’s a good reminder to not get caught up in just the studying of acting but to follow the actual pursuit of acting. Of course, it’s also good to be able to do both. Stay in class, work on your craft while simultaneously going out in the real world, auditioning, making projects of your own, doing theater, etc.

It feels about that time. I’m itching to delve into some serious scene study. However, not sure if my current schedule will allow it. I’m going to slowly look into some classes and will post what happens with that! 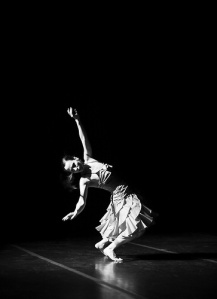