LA Is A Theater Town 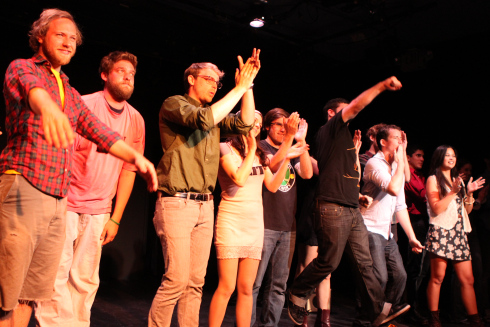 In the past week and a half I’ve been ingesting a whole lot of theater. It wasn’t on purpose, it just so happened to be the thing to do every other day. And what a wonderful thing it is to do! There’s been a lot of debate recently about whether or not LA is a theater town. It’s actually not a new debate; I’ve heard over and over all my life how LA is not a theater town at all and that only Chicago and NY really count. But, I would like to argue that it is. LA Theater is by no means a perfect community, and there is a lot we can work on and places we can grow, but it is here! And I’m talkin’ Good, Original, Creative, Theater.

Here’s a rundown of what I saw and why it was great:

Well, I talked about this last week when I used Superior Donuts as an example for Something to Strive For, but I will repeat the gist of why this production was awesome: all-around strong acting, writing and directing. Yes, it is the Geffen, and they have big budgets and equally big price tags on their tickets. But I think the Geffen is still relevant. They are doing new work, like Superior Donuts, slowly acclimating the typical theater going audience to stuff other than outdated and always produced shows or classics or musicals… ya know, the mainstream stuff as far as theater goes.

The Pity of Things @ Theatre of NOTE

NOTE is always pushing the envelope with new work. (That’s what the “N” in NOTE stands for, by the way.) What I love about Theatre of NOTE is that it will tackle material other theaters wont touch. There is something to be said for that. I also love how it fosters its own- two of the five pieces are written by NOTE members and a third is written by the wife of a NOTE member. And as always, stars NOTE actors who, without fail, deliver solid performances.

Further more, this show celebrates the company’s 30th anniversary season. As NOTE was founded on producing new one act plays, it’s fitting that they included an evening of one-acts as part of the mainstage season. In a town where everything is constantly changing- a nightclub undergoes a facelift and a name change every year, a freeway gets expanded, stores and restaurants close and open- sticking around for 30 years is an impressive feat. What it says is, not only are there passionate actors out there hungry to make this kind of new and interesting theater, but that there are audiences who want it, too.

I’ve been itching to see a show here ever since my boyfriend told me about it and the 2006 (I believe) feature it got in American Theatre Magazine on “Hot, Hip and On the Verge” theater companies. The reason I was so intrigued is because its roots sound similar to my own beloved PianoFight- a tiny 30-seat space in a funky non-distinct store-front on a nothing stretch of Pico Blvd., led by a young and eager twenty-something, a mere 4 years old (at the time of publication), focused on West Coast and World Premieres, its budget made soley of ticket sales, rentals and donations, and no paid staff. In other words, this theater is run by pure passion. Much like PianoFight. And that gets me really excited!!

I’ll be honest, I was shocked at how small this theater was. Never again will I complain about doing “99-seat” theater (which is code for 40-50 seats crammed in a tiny black box with poor circulation and shitty backstage). This space was legitimately tiny. You couldn’t squeeze more people in here even if you wanted to. I was also surprised at the very round about way you get to the theater. First, you walk in through the store front on Pico, which is a large open lobby-like space with walls proudly displaying nicely framed posters of past productions, pretty much empty except for a bench, two chairs and a little counter where a nice young man (perhaps that Eager 20-Something?) checks you in. Then, when it is time to “open house”, he actually leaves his little ticket station, locks the door you just came through and leads you out around and back through a small parking lot behind the building, down a couple of steps and through a back door until you are inside their little theater. That’s when I realized that the lobby space probably turns into their “back stage” once the audience is seated.

Yes, it is exactly what it sounds- Real Housewives of New Jersey meets the leading ladies of Shakespeare. An original story interweaving the ones we know from Midsummer, Twelfth Night, R&J just to name a few. Obviously a comedy, and a very clever one at that, clocking in at just about an hour, this was an awesome way to spend a night out. I’ve actually never been to Second City (a lot of firsts for me in the theater going world) and was excited to see a show there even though this wasn’t actually a Second City production (and, full disclosure, my friend and fellow LA PianoFighter wrote it– awesome).  Aside from the clever writing and cool multi-media (the actors taped TMZ-like segments before hand so it felt like we really were watching a hit reality show) what I loved about this show is the people involved. It goes to show how LA can be and is a theater community- I knew the playwright, producer and four of the leading ladies. This kind of thing is exciting to me. Talented people who know other talented people doing creative things together.

This was an interesting evening of one-acts that we the audience got to vote on (much like PianoFight’s annual ShortLived playwriting competition). The night I went were three pieces, all very different from each other. The first two were about 20 minutes and the last one was an hour. What I enjoyed about this evening, was how different all three were, not just in plot but in style. The sold-out crowd and quality acting again goes to show that there is a place in LA for original theater. Also, once again, it proved to be a small world- one of the actors in a piece is someone who was in a show I produced last year.

How LA becomes a small world as I continue to see more and more people I know or have worked with, the quality productions and the overall enthusiasm from both actors and producers goes to show that there is a theater community. Also, I realized, all five of these shows were of new work, which means each one of these theaters took a leap of faith in their own way. And I’m sure there are dozens more doing the same…

On Theater, DIY and the Perpetual Young AdultIn "film & tv"