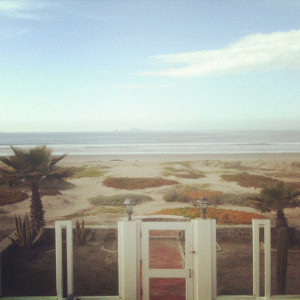 No, not the kind that makes you famous over night; the kind that gives you a breather, time to reflect, time to relax. In a similar post last year, I wrote that actors need vacations, too. And it’s true! So much of this career is go-go-go with no real defining markers, like vacation time or company meetings or whatever else marks time. Half the time I don’t even know what day it is.

Anyway, the past two weeks were somewhat of a whirlwind of a break from all that is acting. A little Mexico, Palm Springs and San Francisco to end 2011 and ring in 2012. I found myself taking a lot in, doing little thinking about acting (which felt so nice) and a lot of thinking about other things that are growing in importance for me. It’s important to recognize that I have chosen this career path and everything in between. (I chose to get headshots from a specific photographer, I chose to join a certain theater company, I chose to accept certain projects, etc.) For the past two years, I have been going along like this, going through the motions in my pursuit of this career. And I realized, recently, that not all of it necessarily makes me happy. I do it because I’ve been doing it, letting it take control over me instead of the other way around. I made those decisions and I can just as easily make new ones. It’s kind of like when I was at NYU and miserable, fearing I was going to be stuck there for four years in my misery when I had an “aha” moment, that looking back seems so simple and obvious but wasn’t at all when I was in the thick of my unhappiness. I realized, hey, I can leave! It didn’t mean I was quitting acting, it didn’t mean I was a failure. Afterall, NYU was my dream, I strived for and achieved. But just because I decided to go there didn’t mean I had to stay there. There was nothing wrong with rejecting the traditional four-year college experience if it wasn’t working for me. It’s my life, I can do it however I want.

So I’m kind of realizing that with my life right now. They aren’t fully formed decisions yet, because I’m still processing it all. But this recent break did give me the ability to see a lot of things about my life that I don’t get to see on a day-to-day basis in the throws of acting career stuff. It’s funny, because I always say there is no “right” way to do this. No instruction guide, no ladder to climb. And yet, there are lots of things I’ve been doing because I feel I should, I have to. I need to take my own advice! I can go about this any way I want. Besides, acting is not my one and only passion, though it is the most prominent now. Over the break those other passions and desires started to speak up. It’s what made me realize that I need to change this up this year. Nor sure how or when or where, but I’m sure I’ll figure it out.

Go After What You Want Until You Don't Want ItIn "inspiration"