Go After What You Want Until You Don’t Want It 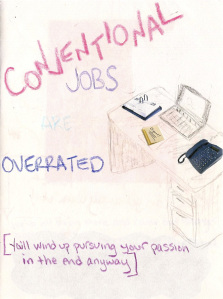 I just came back from a big family-filled weekend (hence the late blog post): my birthday, but more importantly, my sister’s graduation from college in the mono-syllabic major of Art. The combo of getting older (and being in a youth-driven industry) and watching my not-so-little-anymore sister enter the “real world” (whatever the hell that means) pushed a lot of buttons. Rather, it got me thinking and feeling a lot these past few (long) days.

There was a great commencement speaker at the graduation who joked that many adults have been asking all the graduates “you majored in what?” As in, gee that’s a completely useless degree, what the hell are you going to do now? I got one of those, too- English. But, the speaker made the point that it is just as valuable to go after things like Art and English and Theater as it is to go after engineering and law because the world needs a well-rounded bunch who are going to be creative, honest, open, knowledgable, sensitive human beings who, for lack of a better phrase, can make the world a better place. It made me feel better about my degree, and my career choice for that metter. And I think it made my sister feel better about not having a long-winded introduction to her name called across the stage. (Many kids were honorary-this, honors-that, political science and bio engineering, which made the kid with the short major feel kind of shitty… “Art”)

It was a trip to watch her take that diploma because I feel like it was just the other day when I got mine. I always imagined I’d be “further along” by the time my sister graduated. But “further along” how? What does that even mean? A house and kids? A recurringrole on Community? It got me thinking about how there is no one direct route in life, and even though right now my passion is acting, it may not be what I wind up doing in the end. It could be one of many things I end up doing. As long as I am happy, and going after what I want (knowing that what I want can change) then that’s okay! Those four years were filled with wonderful life experiences, friends, travels, adventures that all make me who I am, and I also needed those four years to realize what I want right now is to go after the acting career.  And here I am, committing to it fully, finally.  In another four years I may find that I want something else, and then I’ll go after that. As long as you go after what you want and not what you think you should.

One of my birthday gifts from my mom was a Yoga DVD and book. I was reading about the yoga instructor and she took her first class in her forties when she could barely touch her toes, and now she teaches all over! I found this to be a great reminder that we are constantly discovering, changing, and growing and if we remain open you never know where life will lead you. This is comforting in a way. Sort of takes the pressure off. Right now I am doing what I want. Going after exactly what I want. Just because I didn’t get a guest spot on a network show since graduating college does not mean failure. I will continue to go after it until I don’t want it anymore.

"LA" is not LAIn "los angeles"

Going After the DreamIn "advice"

On the WayIn "advice"