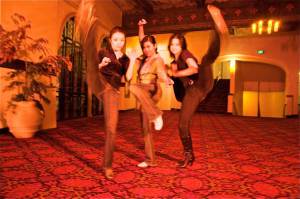 Last year I wrote a post on some of the ridiculous character descriptions for females on the casting websites. It’s old news that there is an alarming lack of kickass female roles, especially leading roles, in film and TV. Well, nothing makes this more clear than the actor breakdowns I sift through each morning. Sometimes, I can’t help but laugh:

FINANCIAL ADVISOR Lead / Female / All Ethnicities /18 – 32
the spot has a spin. it’s a corner on a street, hot girl, you, on corner, clearly a wearing a scantily clad outfit, we make her out to be a prostitute. a guy drives, walks to car. you see they are having a conversation, and here random parts of the conversation “how much”, etc. cut to inside of car, the middle age guy is asking girl for stock/investment advice, because she is the financial guru. and the girl is played as smart, not super dumb….but smoking hot.

(literally, that’s all it said)

CINDY Supporting / Female / All Ethnicities /24 – 28
A hot whore, one of the skimpy chicks that Jose has around his house. She occasionally gives him back massages, but gives him attitude about it.

And these are just a few of many that I see daily. Fortunately, little by little there are people breaking molds and rejecting stereotypes and there are audiences who pay to see their films and shows. I would like to acknowledge some of those awesome shows & movies:

Buffy the Vampire Slayer- probably my favorite TV show of ALL time. Everyone in our house knew that Thursdays at 7 was QUIET time. I would not talk to you if you talked to me while the show was on, you had to wait til commercial break. And you better not be cooking or talking on the phone or anything else that will make noise while the show was on or I would be one upset teenager.

Clarissa Explains it All- probably influenced me more than I realized at the ripe ol age of 7 when the show first came out. I thought Clarissa was the coolest- how she rocked headbands and bike shorts, had a pet alligator named Elvis, and not to mention, was the first Nickelodeon series to feature a female lead!

Hanna- This just came out and I was pretty excited to see it and even more stoked after the fact. Hanna is not only a kickass female character but she literally kicked ass and never once was it about short skirts and cleavage. Okay, so she’s a little young, but that doesn’t stop Hollywood from sexualizing their female leads (even Kickass the movie had pre pubescent Hit Girl in a very suggestive school girl outfit not to mention other issues that I wont get into here).

Mad Men- This show just has it right all around. Every character, no matter the sex, is so layered and complicated. And though it has “Men” in the title, so much of the show deals with the burgeoning women’s movement. It reminds us how, in some ways, far we’ve come.

Bridesmaids- I know this film has been talked a lot in recent months in relation to women in entertainment. Scary to think that so many female’s screenwriting careers depended on the success of this film. Nonetheless, I’m glad it’s bringing attention to the issue. Not to mention it’s hilarious and all the women in it are pretty talented.