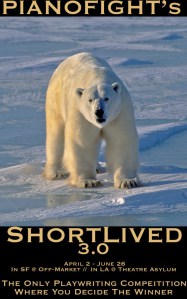 ShortLived 3.0, a playwriting competition featuring local playwrights and theater groups scored by audiences, runs every Friday and Saturday night at 8PM at The Asylum Lab, 6320 Santa Monica Blvd. (at Vine), Los Angeles and at Off-Market, 965 Mission St (between 5th and 6th), San Francisco, from April 2- June 26. Tickets are $20 at the door and online at www.pianofight.com.

Past winners include Daniel Heath who penned the original “Fork Off On Your Own Forking Adventure Which You’ve Forked: FORKING!”, which played to sold out audiences last January and Bill Bivins, the most celebrated playwright from the 2009 SF Fringe Fest, whose full-length play “The Position” debuts February 4th at Off-Market Theater.

Only playwrights from the Los Angeles area and San Francisco Bay Area may submit. If you meet this criterion, you may submit any style of short play – sketch comedy, dramatic, or something in between are all welcome – so long as it has not been fully produced anywhere else, and it does not run longer than 12 minutes.

The script will be directed and performed by PianoFight company members.

If the piece wins the round, it will automatically clinch a spot in the Championship Weekend. It will also stay in competition for subsequent rounds until it scores in the bottom four pieces.

If the piece does not win the round, but places in the top four by the end of the round, it will stay on to compete again in the next round for a chance to clinch a spot in the Championship Weekend.

If the piece scores in the bottom four by the end of the round, it will be dropped from competition, and the playwright may submit again if he/she would like.

LA submissions can be sent to ShortLivedLA@gmail.com.

SF submissions can be sent to ShortLivedSF@gmail.com.

Please put you’re your name and “Playwright Submission” in the subject line.

NOTE: Submissions should not be prop heavy or require too much tech/sets. There is no compensation for competing, however there is also no fee to submit. Compensation will be given in the form of the Grand Prize.