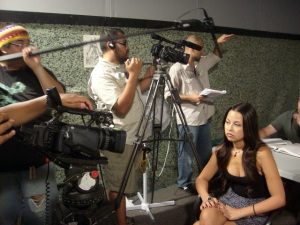 You will often hear this phrase around Hollywood: “Make your own work” And I cannot agree with that more. There is no such thing as waiting in this business. You must always be on the move. Whether it’s new head shots, a new reel, a funny youtube vid, there is always something you can do to further your career. The most important of all these is creating your own work to act in. Frustrated that there aren’t any strong female leads? Write one! Always cast as the comedic bit part and aching to do something you can really sink your teeth into? Create your dream dramatic role!  Want a chance to show off your vocal chops as well as your acting skills? Make a music video! Whatever it is, DO IT. Create, create, create and good things will come.

Here are a few inspirational stories from people I know– i.e.PROOF:

Breaking Upwards: Indie feature written, directed, produced, edited and starring an old NYU classmate. Can’t get cast in an awesome full-length? Make one for yourself.