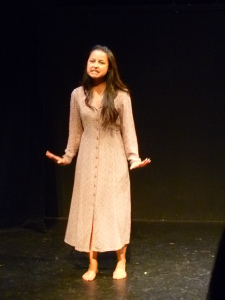 I recently got an audition for a feature film. I was happy to get the audition notice, as I’ve been having a sort of dry spell lately. When I received the sides, they were somewhat challenging out of context and my boyfriend suggested doing a little google search, because sometimes you can find the script online. Well after a few quick minutes of googling I found that not only was this a Fox feature film with a casting director who has many impressive credits, it was for a major motion picture sequel! (they used a code name in the initial breakdown– I did not know CDs do that). The second I realized the casting office and background of the CD, and finally, what this film actually was I became insanely nervous.

But am I this nervous when I’m auditioning for a student film? No. When I’m auditioning for community theater? Nope. For a friend’s project? Not at all. So why should I be nervous for this? If I could walk into that room with the same confidence and assuredness as I do when I walk into any other casting room, that’s half the battle. I must remind myself that I already beat out the odds when I was specifically chosen from the hundreds upon hundreds of submissions and chosen despite my lack of studio credits or a theatrical agent for that matter. I must remind myself:  it’s not a fluke. And most importantly, as the awesome Bonnie Gillespie says in her super kickass blog, I must remember to be “grateful for however far you get in the process, every single time. It’s a miracle anyone ever gets their “big break” in this town.”

Of course I prepared the shit out of those sides. Off book. Outfit carefully chosen. Scene rehearsed sitting, standing, walking around. Directions to the casting office triple checked. Headshot resumes perfectly cropped, stapled and ready to go in my acting folder. I was prepared. And this made me realize something else– the way I treated this audition, very seriously, is the way I should treat those others- the student films, the plays, the friend’s side projects. You have no idea what any one of these opportunities may lead, so you might as well make the most out of each and every one.

Give it your all, and then let it all goIn "auditions"