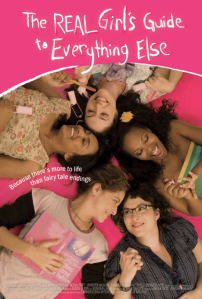 Last Friday, Feb 12th, marked the premiere of the webseries “The REAL Girl’s Guide to Everything Else“. Produced by my friend’s production team, it makes me feel so good, inspired, motivated and proud to see talented actors making it happen within my circle of artists. And not only that, but making strong parts for women. As a female actor in this town, it can get discouraging  having audition after audition for weak female roles. Or scrolling through the casting sites and only seeing “nudity required”. Or looking at character breakdowns and no matter what the part entails, at the end of the description something to the effect of “and sexy”.

The Real Girl’s premiere episode, “Love, Lunch and a BOGO Sale”, proved that this series is going to be fun, smart and entertaining. I will admit, I’m a sucker for anything created by a friend… but so what. I’m not pretending to be objective here. In my most humble opinion, I believe it was evidently well-produced, acted and written- enough that in just a mere 5 1/2 minutes I was enticed to watch more. I can’t wait for episode 2.

This is the cool thing about the direction the entertainment industry has been heading as of late- it’s getting easier and easier for self-producd works. Casting Director Bonnie Gillespie talks about this all the time in her blog, and encourages self-producing actors with her “Self-Produced Clip of the Week”… which, by the way, featured another friend of mine just last week!

The Other Side Part 2: AuditionsIn "advice"

One Response to “Keeping it Real”